When's the last time you were asked to convert PDF files to InDesign or Quark? Clients often ask us to edit old company brochures or marketing material for them. And I don't mean projects that we’ve worked on - I mean projects that have been created by other studios, or by an in-house team that has long since lost the archived source files.

When we (tentatively) ask for the source files, sometimes we’ll get really unlucky and they’ll pop one in the post or fax something over to us to ‘edit’. Naturally, when something like this happens we have no choice but to recreate the documents from scratch. This is not necessarily a bad thing for us. First, there’s more work for us if we have to start from scratch, and therefore more studio hours to bill for. Second, I’m a perfectionist. I love to create a perfectly formatted document with everything precisely positioned and all the document styles cleanly categorized. Chances are, even if we do receive source files including Quark XPress or InDesign files and images, they’re going to be all over the place. We’ll inevitably find non-existent or duplicated paragraph styles, RGB images mixed in with CMYK, low resolution images mixed in with 300DPI pictures and JPEGs, TIFFs and even PICT files all thrown into the mix together.

We usually get PDF files to ‘work from’

More often than not though, we’ll receive a PDF file. And if we’re lucky it’ll be a press-ready PDF. Until now, PDFs have been OK to receive, as they’re fairly easy to pick apart using Acrobat X. You’ll find all the font information in the Properties pane and the images can usually be extracted by right-clicking them and opening them in Photoshop - likewise vector files in Illustrator.

Yup, PDFs are OK. But... no matter how easy they are to pull apart, there’s never any alternative to recreating them from scratch in your chosen layout program. Short of importing them as images verbatim, they're notoriously awkward to edit. Even Acrobat X improvements in text editing don’t go all the way to making PDF file truly editable. There have been software conversion tools that will convert PDF files to simple formats such as MS Word, or HTML which are very useful for extracting text - but until very recently there has been no simple way to convert them back to the mothership - PDF files to InDesign or Quark XPress.

Markzware, a software company that has dedicated its existence largely to pre-press and conversion tools, seemed to be the logical contender for solving the problem. And I have to admit, I think they’ve done a pretty decent job of it with PDF2DTP (don't they love those acronyms!) 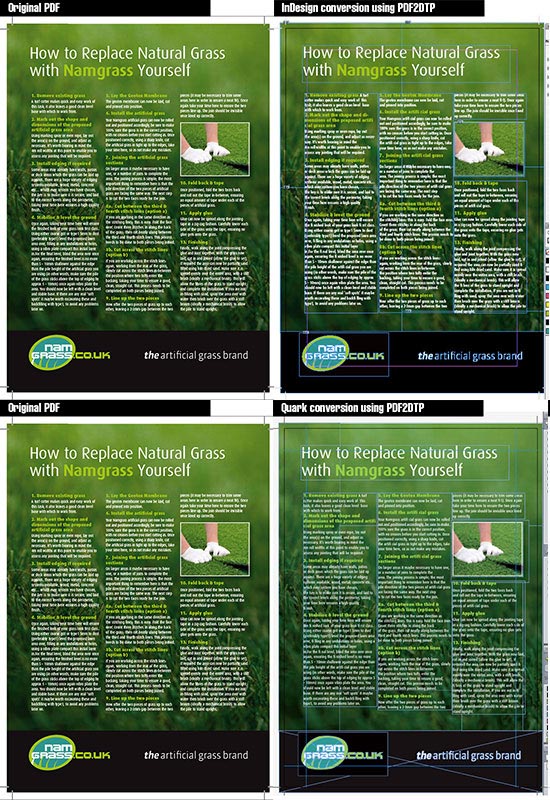 PDF2DTP (Portable Document Format to Desktop Publishing - trips off the tongue, doesn’t it?) is a plugin available for both InDesign and Quark XPress (starting with InDesign version CS6 and Quark XPress version 9) and is the first serious solution I’ve seen to the issue of converting PDF files to InDesign or to Quark. It doesn’t just import them as static images - it’s much more ambitious than that. It imports the layout itself, extracts the text (extremely well) and inserts it into correctly positioned text boxes, creates paragraph styles for all the copy and even extracts and relinks the images. All the files, including the Quark or InDesign document, are neatly saved in a folder of your choice. By the time the PDF has been imported (a fast process), everything has been saved - and the document opens ready for your editing.

So how good is the conversion? We set about finding out by carrying out a number of conversions using both Quark XPress 9 and InDesign CS6.